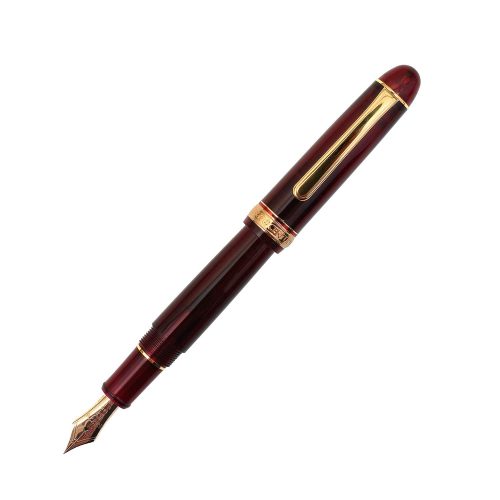 The #3776 CENTURY series is enjoying a good reputation for its “Slip & Seal Mechanism” that prevents ink from drying out in the pen for up to two years as well as the 14K gold wide nib and the standard, well-balanced round form. Striving for even higher quality, we have taken this opportunity to improve the presence and to increase the value of the pen by using an etching technique to engrave the cap ring. Conventionally, we have used a roller maker machine to engrave the logo on the cap ring, which had some limitations in the depth of engraving and reproducibility of the logo. The new #3776 CENTURY fountain pen series employs the method of etching to mark the logo on the cap ring. The etching is an elaborate method that forms deep engraving into the unprotected parts of metal using a fluid by masking the logo to create a three-dimensional effect. It is a very time-consuming process but ensures high quality and exceptional look of the #3 776 CENTURY fountain pens. Enjoy the expression of the logo that changes depending on the direction of light. We will continue to improve the perfection level of both functional and aesthetic aspects to offer the pleasures of writing to our customers.

Few of the options available:

(Information is taken from the Platinum fountain pen website)

Why does the fountain pen ink dry out?

That could be the question of why the fountain pen remains less popular despite steady demand.
As a fountain pen company, we could not overlook this fact of concern by the customers.

Toshihiro Nakata, Platinum Pen’s second president, had found out that in France students are required to use fountain pens in primary school. This caused him to think for a long time on how can he convert fountain pens from a misunderstood instrument thought of as a difficult tool to a more manageable device while making cheaper both within and outside Japan.

Then, he released the “PREPPY” fountain pen series in the year 2006, in which the inner cap was configured to be spring-loaded thereby creating an extremely airtight seal structure. PREPPY series has been widely reported in the media thus quickly gaining popularity. After sharing many of his dreams and successes, Toshihiro Nakata passed away.

Toshiya Nakata, who took over the Company as the third president, then released “PLAISIR,” a metal body fountain pen employing the same function as PREPPY at a more affordable price.

Later, we embarked on the development of a screw-type cap fountain pen instead of a snap-on cap type like PREPPY or PLAISIR. After analyzing the data of writing characteristics from some 40,000 customers across the world, we have renewed all the parts of our fountain pens and produced lines to manufacture a new fountain pen, which was named “CENTURY” in view of the 100th anniversary of the Company in 2019.

Toshiya Nakata left his previous job and joined Platinum Pen when he was 29. On his visits to customers, he talked much about the days in the 1960s, which are considered as the prime of fountain pens. Many customers have told him about receiving a fountain pen as a gift after entering their junior high school. However, as it was a special gift, they did not use it on a day-to-day basis, so the ink naturally dried up and they lost their enchantment with it.

Toshiya Nakata’s concerns were that the fountain pen over time had become less popular compared to the other writing instruments due to the negative impression that the customers felt just once. At the time, it was a common idea among those of the fountain pen industry that the ink of a fountain pen dries out.

Together with the technical staff, Toshiya Nakata has conducted the development of the “Slip & Seal Mechanism” that prevents the ink from drying out in the pen for a screw-type cap, which was an idea he had for a long time. Thanks to the mechanism, the ink was prevented from drying out due to the evaporation for up to 24 months comparing to the existing models at that time while a big difference in the dryness of the ink in the first four months was confirmed. Finally, we were able to release the product in 2011.

After the drying problem has been solved, we received fewer reports of the ink drying out in the pen; instead, we succeeded in offering a smooth feeling with fresh ink. Toshiya Nakata has drawn positive comments from a president of a dealer while receiving many questions if we have changed the ink, too. We continued to use the same ink, in other words, the ink stayed as fresh as it could be.

Owing to the “Slip & Seal Mechanism,” it also became possible to use pigment ink, which was considered to be very difficult to use. This was an innovation for the fountain pen industry.

There are many people who usually use a ballpoint pen but choose a fountain pen for a special occasion. Even in such an infrequent use, the pen stays good and looks after itself. That is our CENTURY fountain pen.