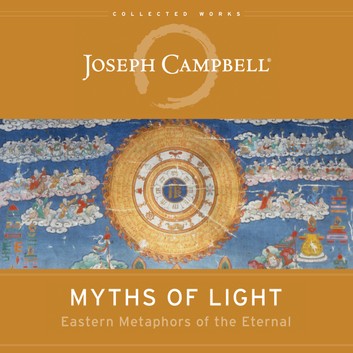 Myths of Light: Eastern Metaphors of the Eternal

Master mythologist Joseph Campbell had a genius for finding the unifying symbols and metaphors in apparently distinct cultures and traditions. In Myths of Light: Eastern Metaphors of the Eternal, Campbell explores, with his characteristic clarity and humor, the principle that underlies all the great religions of India and East Asia, from Jainism and Hinduism to Buddhism and Taoism: the transcendent World Soul.

Joseph Campbell began his comparative study of the world’s religions with a chance meeting with the renowned Indian theosophist Jiddu Krishnamurti on a trans-Atlantic steamer. Though Campbell was deeply fascinated by mythologies and religions from every continent, Asia’s potent mix of theologies captured his imagination more than any other and offered him paths to understanding the essence of myth.

In Myths of Light, Campbell explores the core philosophies and mythologies of the East, comparing them through vivid examples and stories to each other and to those of the West. A worthy companion to Thou Art That and to Campbell’s Asian Journals, this volume conveys complex insights through warm, accessible storytelling, revealing the intricacies and secrets of his subject with his typical enthusiasm.

“Campbell has become one of the rarest of intellectuals in American life: a serious thinker who has been embraced by the popular culture.” — Newsweek

“Campbell excels in telling the stories themselves — which feature brahmins and yogis, gods and monsters, as they disguise themselves as charioteers, eat themselves up and spy on mortals — and in his glancing descriptions of traditions foreign to us: Japanese ‘play language, ‘ an exceedingly polite mode of speech, for instance, or Jainism’s insistence on quenching ‘all desire for life.’…A solid primer.”
— Publishers Weekly

By the time Joseph Campbell returned from his yearlong journey to Asia in 1955, he had undergone a literally life-changing experience. Since his chance meeting with Jiddu Krishnamurti on a transatlantic liner in 1924, Campbell had been fascinated with the myths and religions of what was then universally known as the Orient. During his graduate studies in Europe, he had been introduced to the ideas of Western thinkers such as C. G. Jung, Adolph Bastian, and the Romantic philosophers of the nineteenth century, all of whom had been profoundly influenced by Oriental thought and imagery…