Just in general terms and even with a number of misconceptions, the story of Adam and Eve in the garden of Eden is one of the most popular stories from the Bible.  It happens to be right at the start, in the first few chapters of Genesis.  That is a prime reason for its popularity.  It also happens to contradict modern science and knowledge so directly, many of those educated now would immediately lose interest.  Any hopes of finding a practical lesson may only seem farfetched.  Unless there is a special reason to take interest, many would not concern themselves with this narrative, if they have never had prior interaction with the Bible.  The popularity of the Bible across cultures, countries, and languages is cited as a primary reason to take some interest.  The appeal to simplicity and common sense about the origins of mankind doesn’t strain the mind.  A more compelling reason for interest would be, to understand who God is according to the narrative in Genesis!

Regardless of culture, country, or language the very first impressions of who God is, are made from the people around us and also from what one can observe in nature.  In the age of the Internet, from the earliest time in life, even a child is now exposed to information that exceeds the knowledge of learned ones in the past.  The volume and diversity of information has expanded limitlessly.  At the same time, interaction with people and with nature has changed. 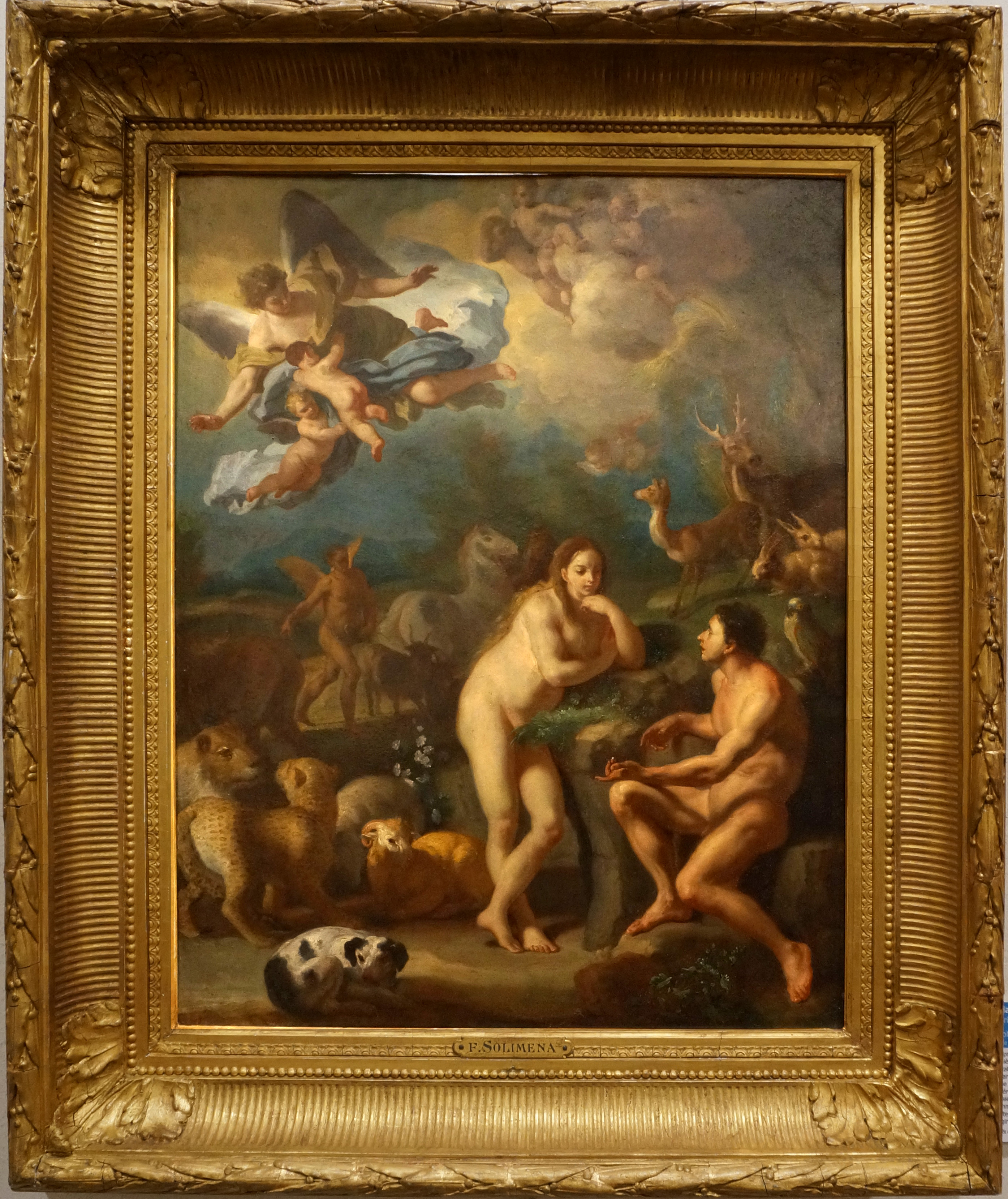 It just so is the case now, there are many sources of information and many views that are competing for attention.  Not to be taken lightly are, broad distinctions we are used to making between East and West.  There must be some reconciling pieces of information still in existence, even if it is the objective of many to work hard in finding differences.

So these words are written especially to those whose minds still find it easy to believe that, humans started on earth from one man and one woman.

Is the Creator selfish?

For a God who generously gave mankind a start in a plentiful garden, this accusation should not even emerge in minds.  It does though, as those facing hardships today think of how Adam and Eve were evicted from their garden home.  It is thought today that, the punishment upon them for a trivial act of taking the forbidden fruit is unjustified.  For mankind to suffer to this day, it is proof of God’s selfishness.

The fruit, which we know from the narrative to be from the tree of the knowledge of good and bad, is an uncommon fruit.  It is uncommon enough to get the attention of an angel, and also entice the first woman.  Whether in actuality or as a representation only, the fruit would impart a special knowledge that was reserved for the gods.  More important than what that fruit was, is what it stood for.  It stood for the knowledge of what we find most contentious in human debates, human choices, and the determiner of what is correct and incorrect use of freedom.  And whenever humans have felt a threat to their freedoms, to this day, that is what we perceive as an attack on our will and our identity.

There is one thing, right before our eyes in the narrative that we do not pay attention to.  The forbidden fruit was unguarded.  There were no angels posted, no flaming blade of a sword turning continually.  The only thing guarding the fruit was the divine command and human conscience.  The barrier was intangible, and very easy to break.  The tree was in the center of the garden, as conspicuous as can be.  There was no confusion, just as there was no doubt about the plenty of food in the garden.  There is much in our lives today that show that same thinking on the part of God.  To disobey God is easy, and He hasn’t set up barriers to restrain our freedom.  He has no shortage of power, and he has the authority to judge.  What He also has is, a confidence that some humans will be there with a living conscience within them, who would restrain themselves despite the freedom to disobey.  If the regret for creating humans reemerges as it did before the flood of Noah’s day, we have to fear what would happen!

In practical terms, if the discussion is taken out of the garden of Eden to the present human community, one of the important questions we have is about rights and freedoms.  It is understandable that God who, is believed to have all the power and authority in the universe does not need to fear anything from human rebellion.  Human governments on the other hand, especially those elected by collective voting in a democracy, have exactly this to fear.  The loss of authority in this day of immediate communications and mass collections on the Internet through even small beginnings presents a danger to individuals, and less so to institutions.  Those in office who fear for losing power, not in that they are removed from office, but that they lose influence over others surely fear what the Internet can do.  Those who are not afraid, but are motivated by the desire to serve will find satisfaction in their work and possible safety from uprisings.

What the Creator did for the first humans shows a Lord, who is humble.  Humans and Satan became presumptuous and fearless because, the temperament of the Creator must not have given them reason to feel terrified.  Perhaps, the Almighty manifested Himself to the first human couple in a way that made it possible for them not be afraid.  Rather, they must have felt comforted and willing to be open.  They knew, their action was wrong, even before the Lord said or did anything in condemnation.

The forbidden fruit was unguarded.  There were no angels posted, no flaming blade of a sword turning continually.  The only thing guarding the fruit was the divine command and human conscience.

There is much in the account itself to show qualities in the Lord that, conflict with the notion of Him being possibly selfish.  So, why did He evict Adam and Eve?  Why did He not just let them live in the garden?  Why did He then restrain them from eating of the tree of life?  Wasn’t it selfishness?  No, it was principle that could not be compromised.  It was to remain limited to God to determine good and bad.  Humans, despite the desire to self-determine good and bad, do not have the ability.  We are, for one thing, blind to the distant consequences.  Even small and insignificant actions could start the snowball of events that time and space must carry to an end, and our interferences or desires become meaningless after a point.

Why create a situation that opens the possibility of harm?

Not talking of the garden of Eden, but of so many human attempts to improve life, we do find there is an opening for harm.  The obsession with safety also takes away from life’s enjoyment.  Computers, cars, airplanes, electricity, the Internet – there isn’t anything that we humans have made that cannot be misused.  For this reason, can we abandon the ideas or the achievements that has brought the most exceptional time in human existence?

Also, to use these achievements as licence for abandonment of where conscience and nature itself should be taking us is, going to hurt mankind in the end.  The moral challenge to humans has already become specific enough down to the personal level, and its expanse is nearly global.  The intermixing of fundamentally different views and concepts is impossible for the human mind to handle successfully.  While there is time, it is important to recognize basic laws of human morality – those that bind all people and cultures together, yet exceed them.  It seems like a race against time.  The powers that are diluting and relativizing all standards are constantly at work, and mankind as a whole is naive.

Mankind has always had a glimpse of Eden because the idea never faded from the vision of our minds and hearts.  It is as common as mankind itself.

It is sad to see, we are once again threatened by a very different vision.  It is the vision of the four horsemen riding again.  As mankind we made this possible when, with the passage of time we divided the world into kingdoms and set up big governments over them.  The development of large institutions and corporations also started to add up in the making of this system.  Once achieved, the human tendency to hold power keeps showing itself, even when elements of the system are pitted against each-other on occasion.  Yes, our subjective understanding of right and wrong does play a part in how we stand for certain principles while we discard others.  In so doing, we have lost sight of simple ways of thinking and believing, even belittling such for being outdated.

So through eyes of science we have to believe that humans are somehow genetically programmed toward harm.  On the other hand, the sad narrative of Genesis showing the disobedience of Adam and Eve at the instigation of Satan shows a similar eventuality.  From either viewpoint, there is possibility of harm.  But the very qualities of humans that make this harm possible – imagination, reflection, assessment – make for the possibility of life being as good as it can be.  This we shouldn’t forget, as we consider how important free will is!  Hope, more than anything is persistently lodged in the human heart.